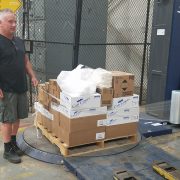 The phrase stretch film is a more apt descriptor, since pallet wrap stretches, not shrinks; and is the term universally accepted in the industry, including the manufacturers of the film. The shrink wrap moniker is a bad nickname from a bygone era – kind of like Meat Head or Opie.
Film for wrapping pallet loads is engineered to stretch out as it is applied to the load. Further, the film has elasticity – also called memory – built in, much like a rubber band. This tendency to return to form serves to squeeze the load or contain it with inward-facing force.
So, the film isn’t actually shrinking. In fact, the term shrink wrap further confuses the situation because there is actually quite a lot of shrinkable film used in packaging – but they are rarely used for pallet containment. Shrink film is another subject for another blog.  As far as stretch film goes, there are about a gazillion varieties. Some films are designed to be applied by hand, and some by machine. Machine Film typically comes in 20″ or 30″ widths. Its made to be stretched mechanically out to high levels.

When considering what stretch film is best for your pallet loads, keep in mind the following …

If you need help sorting this out, let us know. It’s what we do!