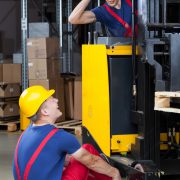 In my 28 years of touring both manufacturing and warehouse facilities, I occasionally found myself in a few places that made me nervous for my personal safety. For example, I visited plants that were processing highly dangerous chemical compounds and mills that put me in close proximity to molten metals and behemoth, heavy machinery.  I even spent some time in an explosives production facility.  However, over all those years, the one place that I thought was easily the most dangerous place was a certain food distribution facility.

In the nineties, I did some consulting in a large packaged food warehouse, where a crew of human order pickers flew around on stand-up forklifts, building pallet loads of mixed product to fulfill customer orders.  Though I’ve been in scads of similar operations, this place had a number of factors that made it particularly hazardous.  The most evident threat was a multitude of fast moving electric pallet lifts seemingly coming from all directions.  Further, these relatively silent lifts were piloted by young men who appeared focused on speed; they didn’t seem to pay much attention to the two pedistrians in their midsts.  It was like real-life Frogger!

Other factors piled on to make this place seriously perilous – the lighting was dim; the aisles were narrow and there were piles of various goods haphazardly heaped hither and thither further restricting operating space and sight lines.  Also unsettling – the employee host leading me through this place was wide-eyed and clearly on guard himself, his head on a swivel, sometimes quick-stepping to get of the way of lifts bearing down on us.

Concerns about fork truck traffic safety are well-founded.  A 2010 OSHA training program reports that “Powered industrial truck accidents cause approximately 100 fatalities and 36,340 serious injuries in general industry and construction annually.” THOSE ARE SOME PRETTY SERIOUS NUMBERS. Forklifts are very heavy, fast moving machines that often sacrifice driver visibility for their practical purpose – moving pallet loads of goods from one area to another.  Just like the cars we drive – they are only as safe as their human drivers, and shoddy maintenance can render them harder to handle and contribute to catastrophic accidents.  It is worth noting, that like the collection of vehicles on today’s highways, you will find many older, poorly maintained machines in operation all over the place.

In my next posting, let’s drill down on those specific challenges to forklift operators in warehousing, and look at the various means to make them safer for employees – mitigating risk and loss.

In the meantime, can you think of a workplace that you felt was particularly unsafe?  Please share!

Want to join the discussion?
Feel free to contribute!

Industrial Packaging 101: What is the Difference between Shrink Wrap and Stretch...